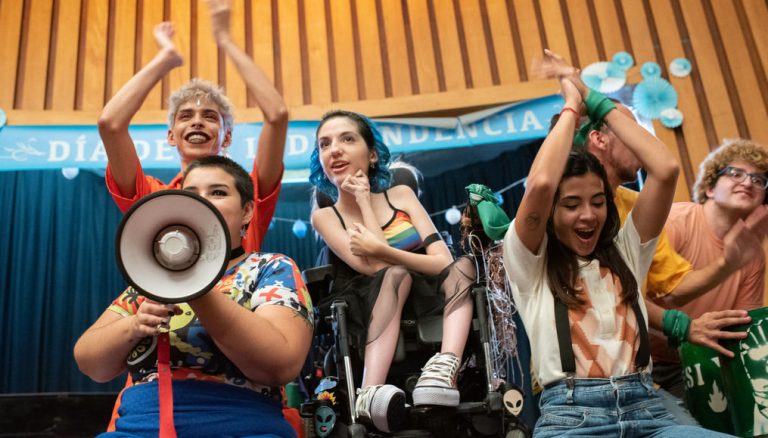 In this series, we follow Juana who joins a new school and builds friendships around actions in favor of access to sexual education in an Argentinean high school. Questions of place in a group, of handicap, Juana being in a wheelchair, and of the search for her sexuality are brought together.

The series being inspired by the experience of the 29 year old co-director and co-author, Rosario Perazolo Masjoan, who is herself in a wheelchair, the diversity of bodies is as much present on screen as behind the screen.

“4 Feet High” is easily binge watched. It is a series with a pop aesthetic that addresses, without heaviness or clichés, current issues such as access to abortion in a South American country. We follow a high school girl, recently arrived in a new school, in the middle of a demand for the right to sexual education in schools. Juana’s disability is not treated as a subject, but rather simply as a characteristic of the protagonist. That, in particular, is the beauty of these episodes with their frankly uplifting soundtrack. Alice

This series was also my first time: my first series that deals with the sexuality of a person with a disability. And it is about time! The sex scenes bring a new perspective, especially showing an often-avoided step: how to realistically go from standing to lying down to have sex, especially when you’re in a wheelchair and need help to do it. And I also loved Juana’s devastating humor, which avoids any pathos.  Iris