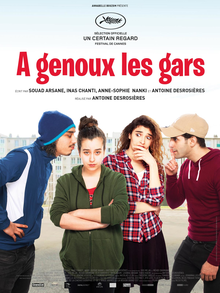 The film was co-written with the two actresses, rehearsed for 4 months and shot in 18 days.

Frankly, this movie made an strong impression on me: by the performance of the two leading actresses (and even of the two guys: not an easy thing to play assholes), the frontal and brutal way they approach their representations of sex, by the scene where you can clearly see how a person can be forced to do something they don’t want without physical violence and by the surprising script right until the end.
Iris