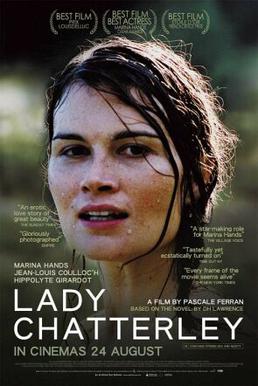 This French film is an adaptation of the second version of D.H. Lawrence’s novel, Lady Chatterley and the Man of the Woods. The story, set in the aftermath of the First World War, tells how Constance, married to Sir Clifford Chatterley, with whom she is bored, meets and falls in love with the gamekeeper of their property.

With such a classic plot line, I can already picture you yearning of boredom: yet another ordinary story of infidelity. But if it’s Pascale Ferran, the director who speaks about it, it goes something like this: “It’s the story of a man who gives a body back to a woman, and a woman who gives a voice back to a man, both of them being on the side of joy rather than the side of tragedy that constantly threatens their existence.” (Libération, 1/11/06). The scenes of sex and intimacy are shot without idealizing the bodies, and each time reveal a discovery of the other and of oneself, surrounded by nature, changing as a reflection of the evolution of the characters.
Iris

The Diary of a Teenage Girl

Find the orgasm – Feet on Earth